We do quite a bit of steak talk around here, but we’ve never covered the true basics: how to pick the one you want.

First, a definition. Steaks are basically any piece of meat that falls under the category of “fast-cooking” cuts—cuts that are low enough in connective tissue that they don’t require the long cooking times that “slow-cooking” cuts require. The difference between a steak and roast essentially comes down to size. Any good roast can be cut into individual steaks (although, unfortunately, it’s not possible to put together several steaks into a large roast without the aid of transglutaminase, or at the very least, a reliable time machine).

While cheaper cuts like sirloin, flank, and skirt, or cheffy cuts like hanger and flatiron are becoming increasingly popular and available these days (my favorite is hanger), the kings of the steakhouse are still those cuts that come from the Longissimus dorsi and the Psoas major. The Longissimus dorsi are a pair of long, tender muscles that run down either side of the spine of the steer, outside the ribs, all the way from the neck to the hip. The tenderness of a steak is inversely related to the amount of work that a muscle does during the steer’s lifetime. So as a relatively unused muscle, the Longissimus dorsi (commonly referred to as the loin or the backstrap) are extremely tender, making them an ideal candidate for steak (and also quite expensive).

The Psoas major are a pair of shorter muscles that starts about two-thirds of the way down the steer’s spine and run on the opposite side of the ribs to the Longissimus—the inside. Commonly referred to as the filet mignon or tenderloin, they’re by far the tenderest piece of meat on the steer. That, coupled with their small size make it them most expensive cut at the butcher (that whole supply and demand thing, you know?)

Out of these two muscles come a number of cuts. Here’s what you’ll find at the typical butcher. 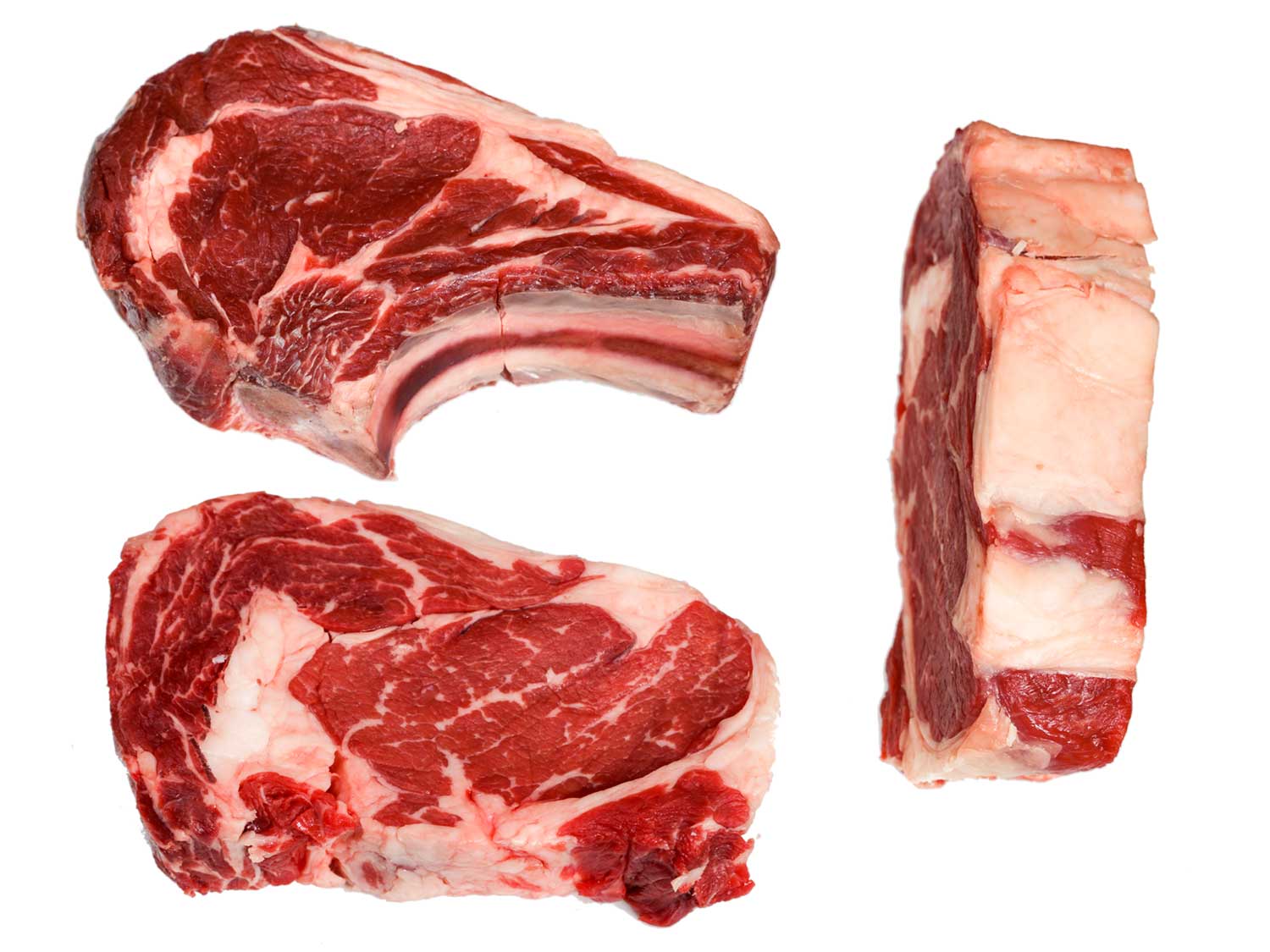 Where It’s Cut From: The front end of the Longissimus dorsi, from the Rib primal of the steer. The further towards the head of the steer you get, the more of the Spinalis muscle you’ll find in your steak—that’s the cap of meat that wraps around the fatter end of the steak.

What It Tastes Like: Highly marbled with a large swath of fat separating the Longissiumus from the Spinalis. Fat is where a lot of the distinctive flavor of beef comes from, making ribeye one of the richest, beefiest cut available. The central eye of meat tends to be smooth textured with a finer grain than a strip steak, while the Spinalis section will have a looser grain and more fat. Many people (myself included) consider the Spinalis to be the absolute tastiest quick-cooking cut on the cow.

The Best Way to Cook It: Pan-frying, grilling, broiling. Because its copious fat is prone to causing flare-ups, grilling can be a bit tricky. Have a lid ready, and stand by with the tongs in case you need to rapidly spring into action and retrieve them from the depths of a fireball. This is my favorite cut for pan-searing. 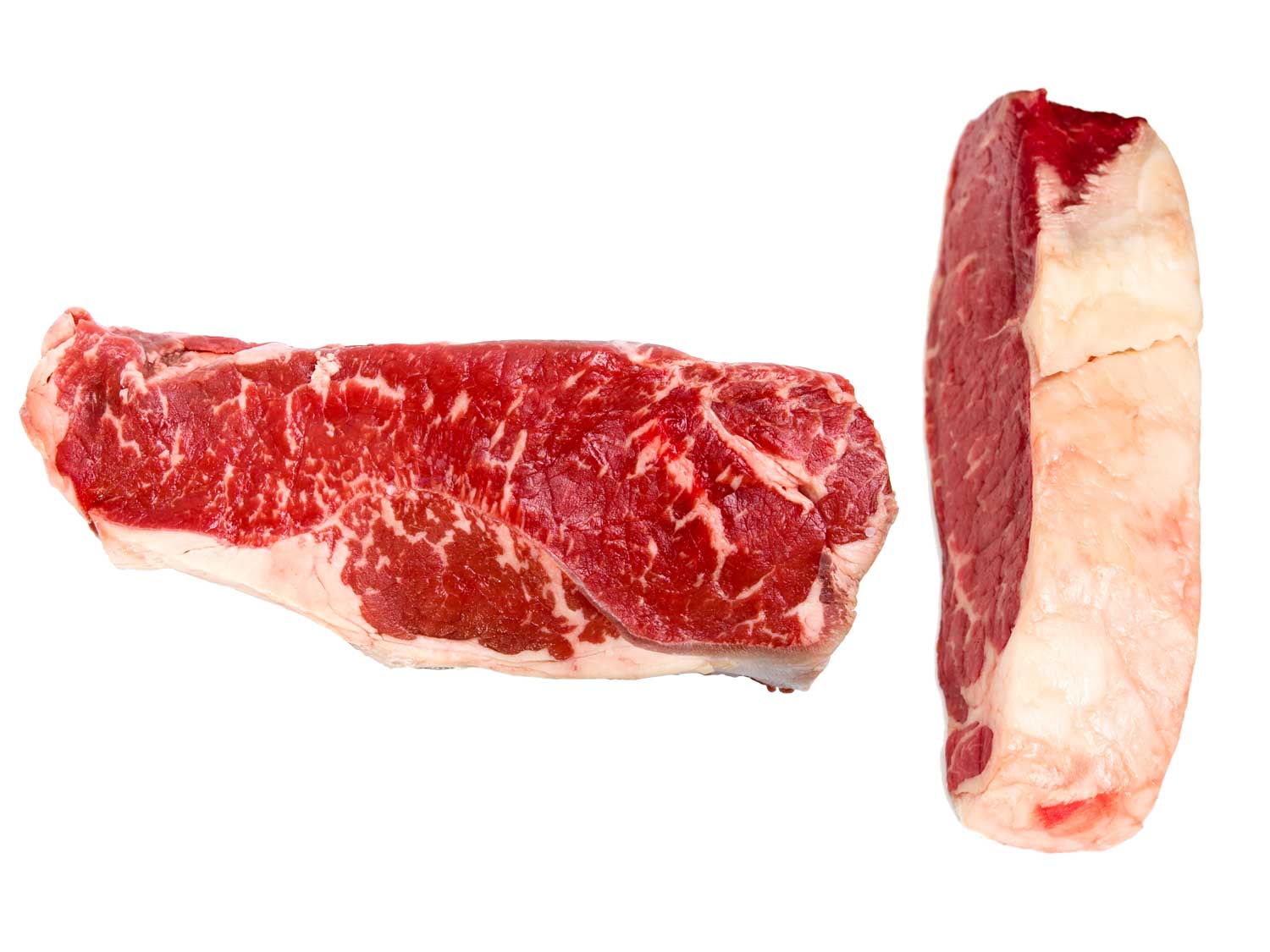 Also Sold As: New York Strip, Kansas City Strip, Top Sirloin (which has nothing to do with the Sirloin primal of the steer, or the Sirloin Steak, which is an entirely different cut), Top Loin, Shell Steak (when sold bone-in), Contre-filet

Where It’s Cut From: The Longissimus dorsi muscle, towards the rear-end of the steer in the Short loin primal (that’s the primal just behind the ribs)

What It Tastes Like: Tight texture with a definite grain means strip steaks are moderately tender, but still have a bit of chew. Good marbling and a strong beefy flavor. Not as robust as ribeye, but much easier to trim with no large pockets of fat, making it an easy-to-cook, easy-to-eat cut. A favorite of steakhouses. 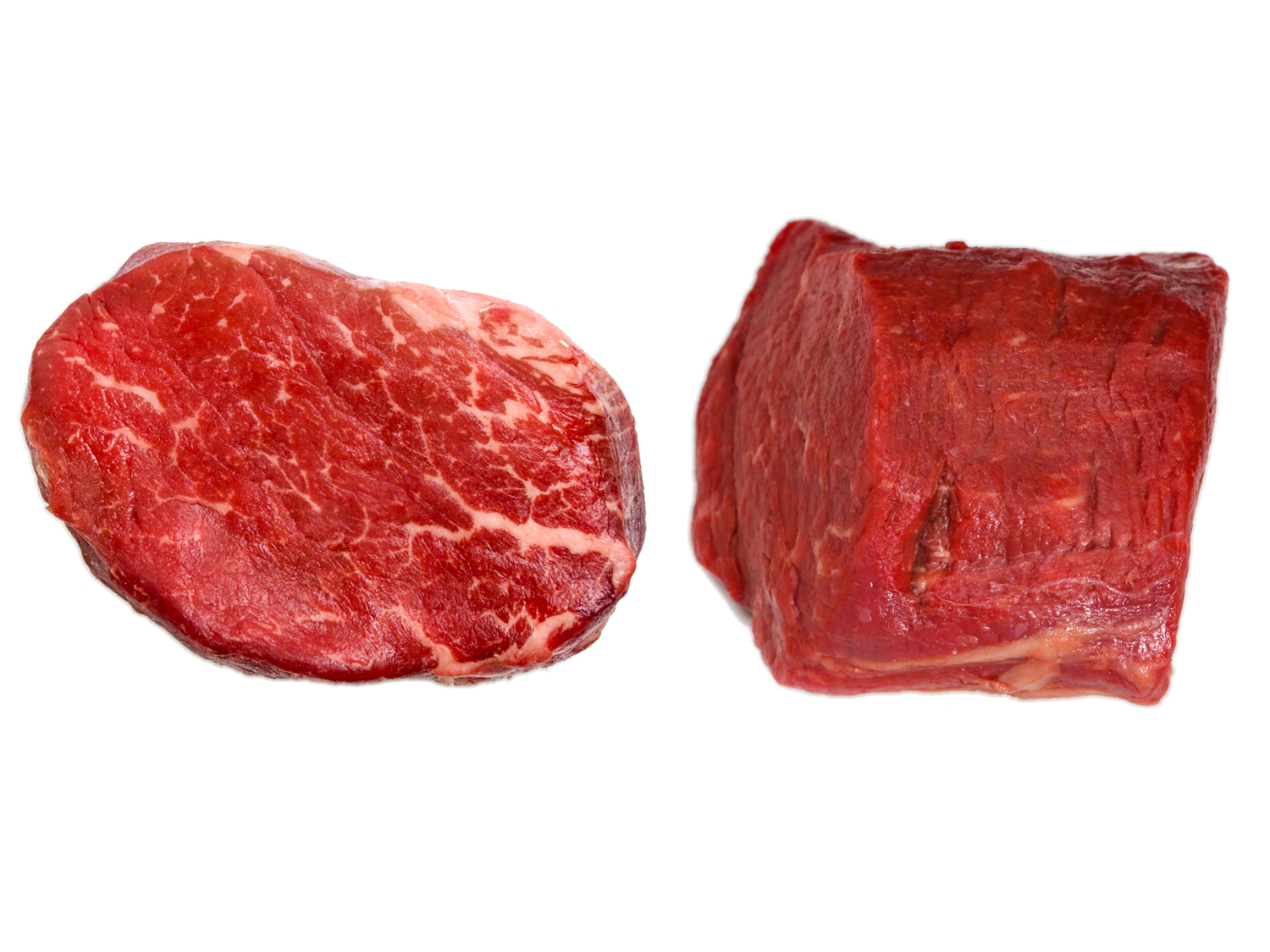 Also Sold As: Filet, Filet mignon, Fillet, Châteaubriand (when cut as a large, center-cut roast feeding two or more), Tournedo (when cut from the smaller tapered section of the tenderloin closest to the Rib primal).

Where It’s Cut From: The central section of the Psoas major muscle in the Short loin primal of the steer.

What It Tastes Like: Extremely tender with an almost buttery texture. Very low in fat, and correspondingly low in flavor. To be honest, unless you are looking for a low-fat cut or prize tenderness above all-else, you’re better off with one of the other, less expensive cuts.

The Best Way to Cook It: Pan-frying, or grilling. Because it’s so low in fat and fat conducts heat more slowly than muscle, tenderloins tend to cook much faster than other steaks and are far more prone to drying out. Pan-frying in oil and finishing by basting it with butter helps add some richness, as does wrapping it in bacon before grilling (a very common approach). Even better is to purchase and roast or grill-roast it whole as a Châteaubriand—less surface area means less moisture loss. Because of its mild flavor, it’s often paired with flavorful sauces or compound butters. 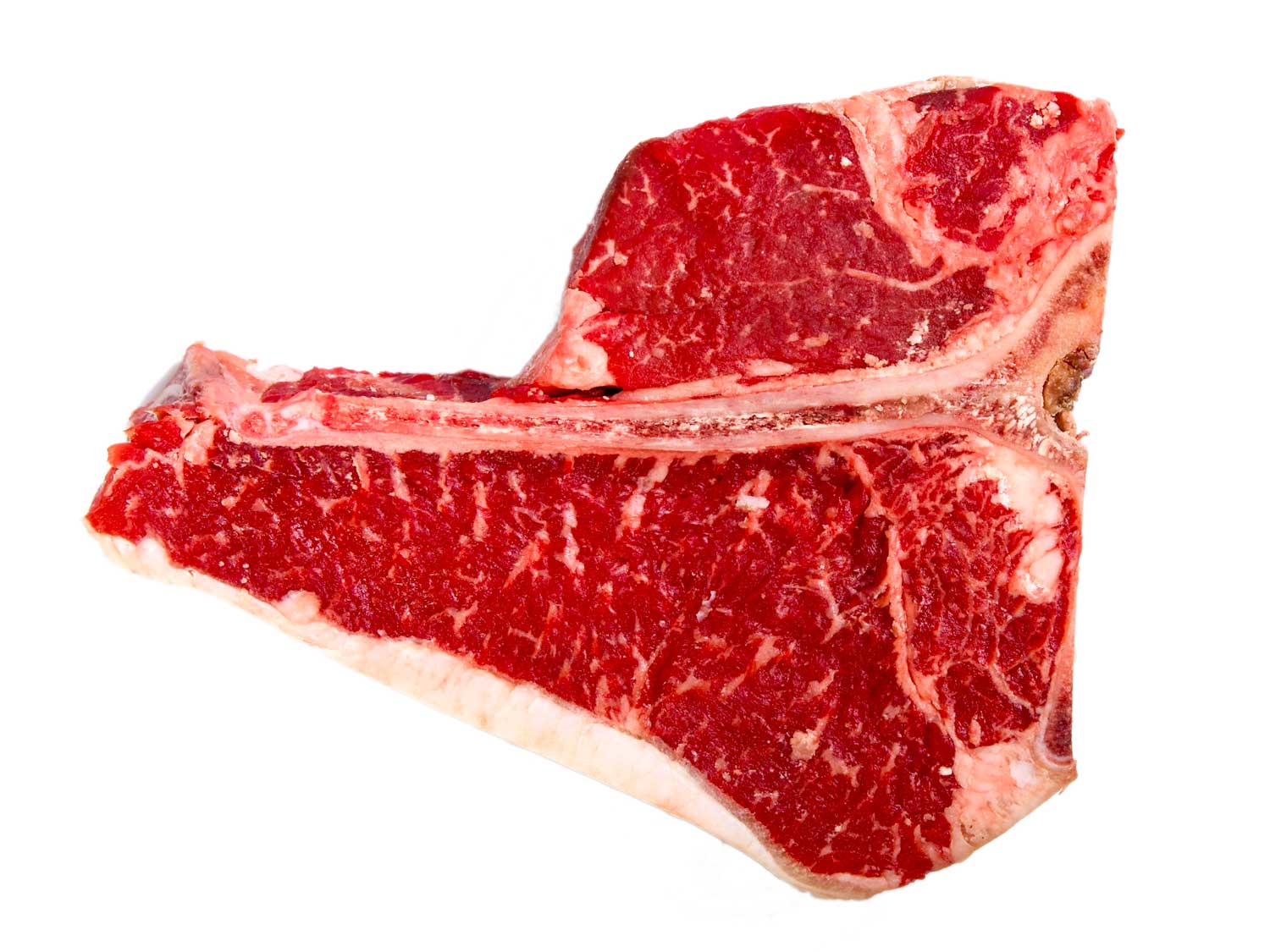 Also Sold As: Porterhouse (when tenderloin section is 1 1/2-inches or wider)

See how the two steaks fit together?

The Best Way to Cook It: Grilling, broiling. Because of the irregularly-shaped bone, pan-searing is extremely difficult with a T-bone. As the meat cooks, it tends to shrink down a bit. The bone ends up protruding, preventing the meat from getting good contact with the pan surface, and inhibiting browning. Because of this, you’re much better off grilling it.

But even grilling isn’t completely straight-forward. Remember how the leaner tenderloin cooks faster than the fattier strip? That problem is compounded by the fact that the tenderloin section of the T-bone or Porterhouse is much smaller than the strip. The result is a tenderloin that ends up overcooking before the strip is even close to done.

But never fear! There’s an easy way to fix this problem. When grilling or broiling, just make sure you position the steak such that the tenderloin is further away from the heat source than the strip. Under a broiler, that means that the steak should be oriented so the strip rests closer to the heating element or flame. On a grill, this means building a modified two-level fire (that’s all the coals under one half of the grill, leaving the other half empty; on a gas grill, light one or two of the burners, leaving the other one off), then positioning the steak over the fire so that the tenderloin sections are closest to the empty side of the grill.